America is a Federalist Society.  We have a large powerful Federal Government balance by individual state governments.  When working properly, Federalism has one massive advantage over other political systems: a system of trial and error.  States often share similar problems and common questions of governance. The strength of federalism comes when states with similar problems come up with different solutions.  After time passes, the nation as a whole can see how the two varying solutions have worked to solve the particular problem.

That's how federalism should work, anyway.  I have a feeling that it does not often happen. Stubbornness, pride, regionalism, and ignorance can prevent states from enacting proven measures. Furthermore, a practical solution to a perceived problem may interfere with a special interest. Vast amounts of wealth can be spent to change people's beliefs.

A few months ago, when the Republicans were in primary mode, a mini-controversy erupted around the issue of contraceptives. Primarily that they need to change the composition of the Supreme Court so that Griswold v. Connecticut, 381 U.S. 479 (1965) can be overturned. (Nothing says freedom quite like having your right to privacy utterly stripped away.) I was shock to hear this in the modern era, since I knew that Texas has both a high Teen Pregnancy rate and a poor sex education program.  It was even more disturbing to hear contraceptives being discussed, in general and not only for teens, because I'm an adult and I will place a piece of latex on my penis and have sex with whomever I want. It is insane to think otherwise, especially by people who claim to champion freedom.

While the Federal Government has a role in Sex Education, primarily through Federal funds distributed to states, the majority of the policies come from the state and local levels.A state can choose to implement comprehensive, abstinence only sex education, or leave it up to local school districts (Texas.)

The following is a series of maps, the majority created by the CDC, which shows  general trends in America based on Health, Education, and Socio-Economics.

The first set of four maps show the basic sexual health of the nation, at a state or county level.

Speaking of Sex Education, here is what I think should be shown. It would defiantly help lower teen pregnancy, raise tolerance and awareness. And evangelical christian types really show love my method as it is a perverted version of abstinence only. 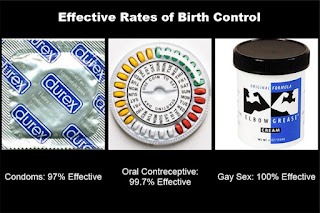 I'm joking of course. Obviously nobody should be pressured into being gay, just as nobody should be pressured into being straight.  Attraction is attraction: if you're gay you're gay, if you're bi you're bi, if you're straight then you won't have any fun you're straight. Oh yes, also always wear a condom, always! There is no acceptable reason to not wear one during recreational sex. And if you are having sloppy gay sex, use a non-oil based lube. I digress.

Moving on to something, much, much more serious, here is a map of America based on Heart Disease.
Heart Disease Map:

For shame America, for shame. How can Wisconsin, the land of beer and cheese, be one of the healthier states when it comes to heart disease.. For shame.

Here is what the up coming generation will look like.

Compared to heart disease and adult obesity, the government can play a much greater role, in a much simpler fashion in High Schools. From extended PhysEd to low calorie lunch options, home economics, and health courses, states can lower the obesity rate among teens.  Furthermore we can use federalism to find the best solution. 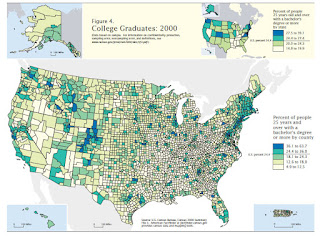 I was planning to show a Hate Crimes map; however, since it is up to the individual states to define what a hate crime is and to report them to the FBI, I decided to forgo a map. According to the FBI's data center in 2010, Mississippi had one agency  reporting hate crimes while Iowa had fourteen.  Mississippi claimed to have only 11 hate crimes (they claimed only 1 in 2009) while Iowa claimed 14 cases.

I really have my doubts about the accuracy, since as I said before states define and report hate crimes. Mississippi and Alabama have a long history of hate crimes and a failure to prosecute them.  I question the accuracy for another anecdotal reason; I haven't ever heard of a movie called Iowa Burning.

SPLC also claims  that there are currently 41 known active hate groups in Mississippi, while there are only 4 in Iowa. But unfortunately this methodology could easily be flawed, since Wyoming, the birth place of hate crime laws has only 2 reported hate groups.

And to be truthful I really am disappointed with the honesty of the numbers, because I wanted to use those statistics to take an honest look at hate crime policies in the US.  I am not fully convinced that the progressive is necessarily the best practical way to solve hate crimes.

For as much as I joke, name call, and argue there is one thing I will not belittle. Perhaps the most telling of all is this one map.

If there were an omniscient, omnipotent, and all loving god, I cannot think of any greater issue, any greater image that would disturb this god than the poverty map.

This country and our individual states can only improve when the American people educate themselves. Ask questions of politicians, ask question of journalist, just ask questions. People lie, statistics can be manipulate, and I could be entirely wrong on my assertions, but given what I have I believe we can find a solution to our greatest problems and move forward.

I then broke it down by Quartile:

I then broke it down by Half:

I then pulled a map over laying the Half map and a map of state legislature by controlling party:


There are obvious flaws in my methodology. There are also larger questions of socio-economic factors playing a more responsible factor in the systematic educational success of a population, and so forth. At the same time, I do believe this simple map is at the heart of the fundamental american dynamic.

Freedom Just For Me