In the previous post I published a lengthy diatribe about Marvel's leaked licensing agreement with Sony Pictures, and my feelings of bleh.

I just want to reiterate that I don't think Marvel is homophobic (the last issue of Amazing Spider-Man had a same-sex wedding for Christ-sake) it's more about my realization that I can't be Spider-Man, that I'm not Peter Parker, because I ride dick like its the last roller coaster at the amusement park. 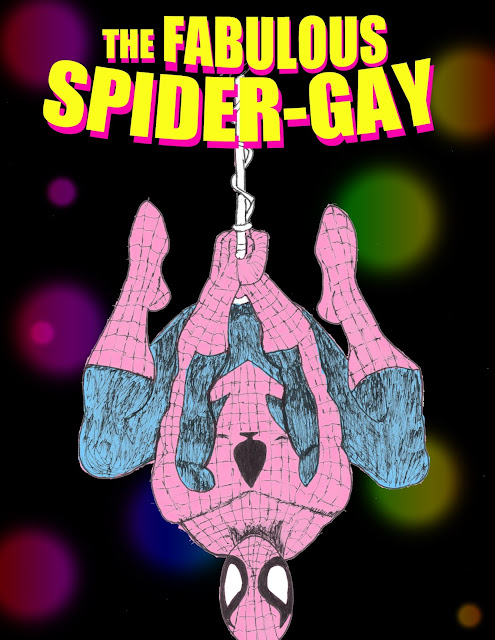 On a high school field trip to the Mall of America 3M Labs, Parker Peterson was bitten by a radioactive spider who happened to be gay. Really the gay characteristic of the spider is superfluous and an attempt to avoid a lawsuit by Marvel, as Parker already had a healthy appetite for the sweat man meat, and as we all know you being gay is not a choice and people cannot be turned gay or straight. However he did gain new strengths, the ability to leap higher than buildings, the ability to detect trouble before it arises and has an encyclopedic knowledge broadway show-tunes.

Now a grad student at the University of Minnesota, go Gophers, Parker Peterson is living with his current boyfriend, beat journalist Eddy Hudson, get it... like Eddie Brock and Rock Hudson... Eddy Hudson. Parker also lives with a secret... he is the Fabulous Spider-Gay!

Between his job as a Paralegal at Nelson & Burdick LLP, school, and life as a crime fighter, Parker's spread thin. 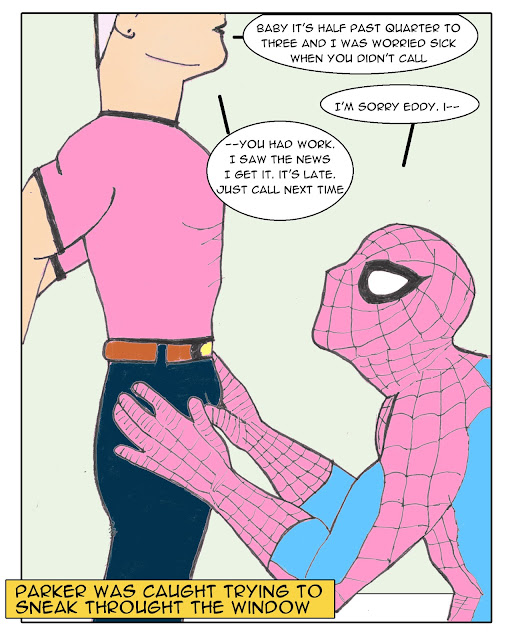 Parker has been working on the case of Manuel Peralta, an immigrant from Guatemala, who has been wrongly accused of a crime. He faces 5 years in prison for felony drug possession charges with attempt to distribute followed by mandatory deportation. Without the testimony from a low-life witness who can clear Manuel of the charges, he stands to lose his 3 children. 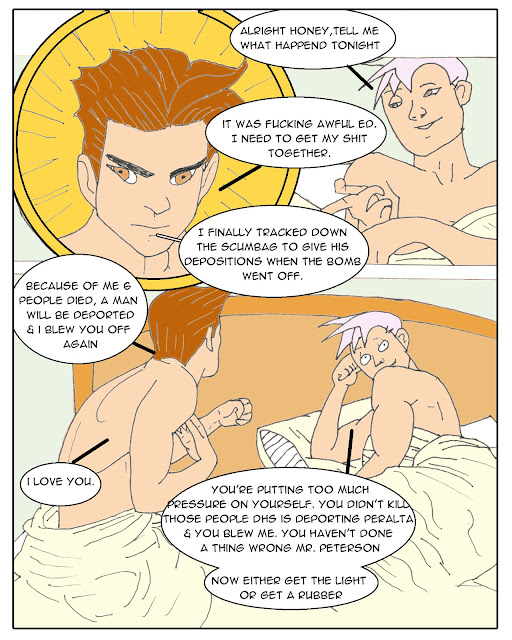 I may have gone a little overboard. In the next scene, Parker cracks open a jar of crisco and wears Eddy like a human puppet. It's objectively pretty sick.

And the scene where Parker uses his webbing to tie Eddy's hands to the head board of the bed... So hot. 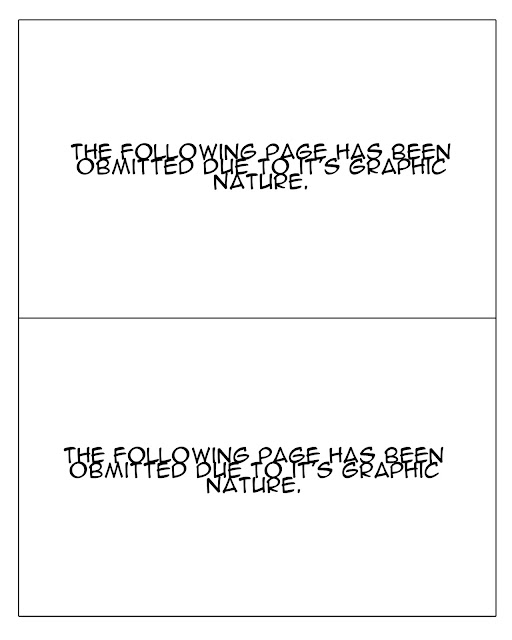 If I were fully committed to making a full episode I would have Spider-Gay tackle a low-level criminal. After successfully tackling the criminal, a police office would call Spider-Gay a "fucking faggot." The insult would stick with Parker creating his symbiotic black suit. 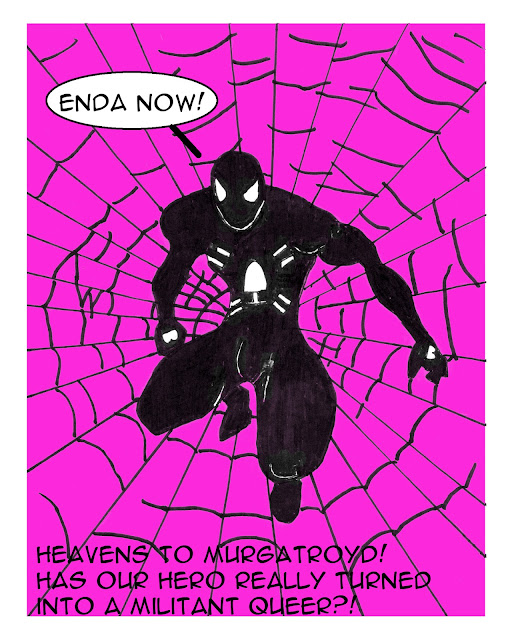 When Parker Peterson sheds the bile of his black suit will it attack Eddy Hudson? Will Eddy then become a self-loathing gay villain who will then one day turn into an anti-hero? Have you read a comic book ever?

I think I done with this now.

Now for the legal crap:


If anyone would like to continue this parody, I am licensing Spider-Gay out under Creative Commons licensing agreement Attribution-NonCommercial CC BY-NC 4.0. The Agreement can be found here with further details here.

Just remember to keep it a parody by mocking Marvel and their decision to not allow a gay Peter Parker. If does not qualify as a parody and is therefore a derivative work your up shit creek.

On the left is the leaked Marvel/Sony agreement and on the right is the parody agreement anyone who decides to further Spider-Gay technically agrees to...(or should probably agree to in order to comply with fair use law in regards to parody.

Peter Parker can be nearly anyone. That's a part of his charm. He's been remade a number of times. His personality is malleable. And Spider-Man is not always Peter Parker. In essence anyone can be behind the mask. But Spider-Man nearly always tries to be the good guy (or girl in the case of Mattie Franklin that one time she posed as Spider-Man.)

Peter Parker is not gay. He has never been depicted as being queer. He's had long-term girlfriends and a wife (sometimes a daughter.) I recently stumbled on an article by the Huffington Post, which lays out a leaked legal agreement between Marvel and Sony Pictures. In the document it is reveled that Peter Parker cannot be a homosexual.

While I have never expected Peter Parker to be gay or necessarily want him to be gay. But he represents a queer perspective for me.  In the clip below from Modern Family, Mitchel lays out his feelings on Spider-Man at the 2:52 mark:

“Spider-Man, he… he spoke to me. I… I think it's because it's about this nerdy kid who has this special secret side of himself that he can't share with anybody, and… and that's how I always felt. Spider-Man made me feel like it was okay to be different. And... It made me fee tough enough to… to get through the rough times."

After 20 years of reading the Amazing Spider-Man, I finally found out who Spider-Man cannot be: Me.

I found out that there is no Santa Clause around age 3, so I don't remember what it was like finding out (my guess is that I didn't care because I still got presents from mom and dad)... perhaps this is the closest to it that I'll feel. Or maybe it's more like checking a jug of milk and finding it's gone bad, you're going to drink milk again once you get a new jug, but... ugh.

I'm disappointed in learning this. In the back of my brain I always knew these were the rules to Peter Parker, it's just frustrating that it was leaked. I love Marvel comics. The only DC character that I really like is Ollie Queen. Marvel has a social conscious. They have always championed human rights and have been along time ally for the gay community.

It's also not like they intended for this to get out. And any controversial statements from Marvel that I have noticed seem to have been in response to this leak.

I guess the moral of the story is be careful of what you say even behind closed doors, and perhaps Roland Barthes was right: don't listen to the artist.

Below is a list of what Spider-Man and Peter Parker can and cannot be. Please note that under murderer and directly below pedophile, Spider-Man cannot be a homosexual:

In my quest to better-fy the internet, I have translated a film from German that was until recently considered lost. Algol: Eine Tragödie der Macht was directed by Hans Werckmeister in 1920.

As a heads up this film is not queer in any real way (well besides the fact that expressionism speaks to me as a gay man.)

Please watch this film (a copy is posted below) and read my criticism of it.

If you speak German and you think some of my translations are shit, please gently let me know where I go wrong. It's been a while since I've done any real work with German... so yeah.

Now that  that's over, without further adieu, I present Algol: Tragedy of Power.


So did you watch it yet? Thank you if you did.

I want to preface my remarks by saying that I in fact enjoyed this film. I think it is an interesting concept with beautiful scenery.

With that in mind, this film falls flat. I like it, but I know that it misses in places.  It's a sci-fi version of Faust, which if it would have been executed properly would have been one of the best movies in history. Particularly since it pre-dates Murnau's Faust.

The scenery is fun and is often in the mode of German Expressionism.

The plot is sloppy, it lacks a consistent voice, and it overreaches at times. After Mephistopheles the demon Algol gives Faust Robert Herne the perpetual energy machine,  Algol's purpose is next to pointless.

If Herne's perpetual energy is corrupted by humanity, class consciousness, and greed, then why is Algol necessary as the devilish, working-class provocateur.  Mephistopheles is perhaps in the top 10 literary characters of all time. It is painful to see a Mephistophelean character lack purpose after the bargain. We don't get a sense of motivation from the character. Algol is just evil.

The overarching theme is luddite/ conservative. Technology corrupts; let's go back to . Modern society is decadent and will be our downfall as represent through Reginald Herne (Robert's heir) and his bitch lover Yella Ward. The motherly/ worthy of love female characters are pure (sexually speaking) and rural. However city women are cock tease whore who demand power from their men for them to feed off of. It put it more concisely, it is the old Madonna/ Whore dichotomy without any nuance, complexity or cleverness.

I Don't Want to be a Man

I posted this delightful short film:

Ossi Oswalda plays a young woman of means, who dislikes being treated like a woman. To remedy her situation, she decides to become a man. Holy shit, right?!  Cross dressing in 1918. Cabaret was not legal in Germany until the fall of the Prussian Empire (although this has as much to do with political censorship.)

Of course Ossi will find out being a man is not so easy. In exchange for money, power, respect, and dignity, men have to give up their seats to ladies on the train.  I mean what's the point of having a dick if you have get up to women. I do not get up to women. Alright, the bad pun is over.

Ok, so yes, this movie is problematic as a queer/feminist film. On one hand it is daring when you consider that movie was filmed in the twilight of the Victorian era. On the other hand, it reaffirms gender conventions. I don't want to give anything away in this post, so I will come back to this film with a more detailed vivisection.

Please watch this film if you haven't yet. It is fucking brilliant. Ossi is perhaps the most charming woman of her era.

Email ThisBlogThis!Share to TwitterShare to FacebookShare to Pinterest
Labels: I Don't Want to be a Man, Public Domain, YouTube

The fun thing about silent films is that you can easily change the inter-titles to make a brand new film.

So without further adieu Charlie Chaplin is the Flapper Ninja:

I thought this was funny as shit, but I sure others won't. Particularly I make several anime reference that are ultra nerdy.

For the past little while I have been busy working on a side project, restoring and distributing public domain films. Awesome, I know. A lot of the films are created by queer folk or express gay themes. The channel is called The Flaming Vault, which is in reference to the 1937 Fox studio fire that destroyed 40,000 reels and wiped out the company's archive.

The Public Domain was established in the US Constitution with the Copyright Clause:


To promote the Progress of Science and useful Arts, by securing for limited Times to Authors and Inventors the exclusive Right to their respective Writings and Discoveries.

Maybe one day I will write an article on why a future copyright extension should be viewed as unconstitutional, but the Supreme Court won't rule that way when congress pass the next extension sometime before 2019. Which reminds me Lessig 2016.

Anyway here is a promo for the channel:

As always the content is ad free on my end.